Mildura – Part Two of a tour of the Murray 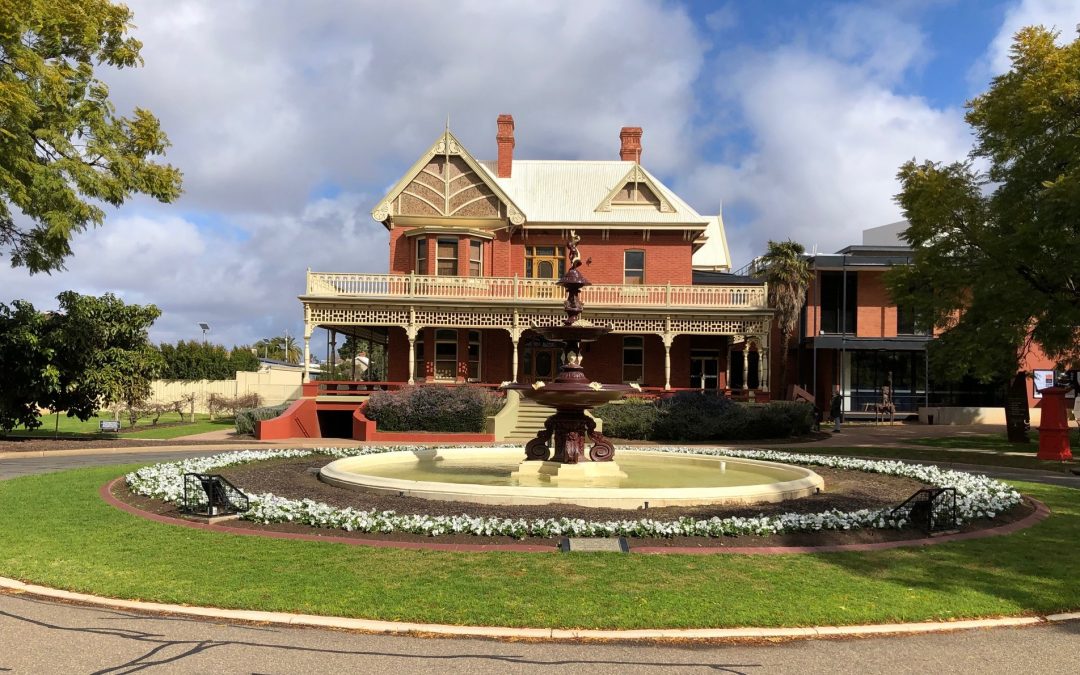 The settlement of Mildura dates back to the late 19th century and its establishment is indebted to two Canadian brothers. George and William Benjamin Chaffey were encouraged to come to Australia by the then Victorian Cabinet Minister, and later Prime Minister, Alfred Deakin after seeing the irrigation work the brothers had done in California. When the brothers arrived in Australia negotiations with the Victorian government didn’t go well and the brothers switched States and started work first in Renmark, South Australia. Here they laid out the plans for the town and irrigation systems. In 1886 they finally signed an agreement with the Victorian government and were granted a huge sway of land, which resembled a desert at the time. They set about installing steam powered pumps to lift water from the Murray to irrigate 33,000 acres of farmland. Many settlers followed them to develop the ‘colony’. It enabled some of the driest, arid land in Australia to produce food all year round. In 1888 the brothers established Chateau Mildura, and planted 150 acres of grapes on the property. It is quite ironic that they established this winery, as the new land was declared a ‘Temperance colony’. Sadly things didn’t go exactly to plan, and the company went bust. George returned to California but William stayed and continued to work towards realizing their dream of establishing Australia’s first irrigation colony, and remained an influential figure in Mildura up until his death in 1926.

Mildura’s fortunes improved with the arrival of the railway in 1903. During the 20th century the dominant wine concern was the Mildura Wine Company which became the Mildara Wine Company in the 1930’s based at Merbein. It was a famous company for brandy and fortified wines and was finally owned by Mildara Blass. Their most successful wine was a sherry (Apera) called Chestnut Teal. As with many fortified wines, sales declined, and the label fell into the annals of history until the brand was bought by Mad Wine Co in 2018 and relaunched. Expansion continued in the region during the latter half of the 20th century with the arrival of McWilliams at Robinvale and Lindemans wines opening Karadoc winemaking facility in 1974.

Like the Swan Hill area, the soils are sandy red calcareous loam. The region is hot with extremely low rainfall in the growing season. Topography is flat allowing machine harvesting and other mechanisation in the vineyard. Salinity is an issue with a high water-table. The area is also referred to as the Mallee, named after the multi stemmed eucalyptus trees that grow in the area.
Whilst the landscape around Mildura is dominated by the vine, it is often the fresh or dried table grape varieties and not destined for wine production. The area is also referred to sometime as Sunraysia. This name came from a 1919 competition held by the Australian Dried Fruits Association. The name was to describe the dried fruit region around Mildura.
The Murray Darling -Swan Hill region produced 401,000 tonnes of wine grapes in 2021. This incorporates plantings in both Victoria and New South Wales. Major grape varieties are Chardonnay, Sauvignon Blanc, Pinot Grigio, Shiraz, Cabernet Sauvignon and Petit Verdot. Muscat Gordo Blanco was traditional important for the region.

Owner Greg Christensen is a font of knowledge about the Murray Darling and a great ambassador for the area. When we come to discuss the wines, the talk is all about the major players and corporate capers in the industry. Often the labels you see on offer in the store don’t appear in Australian retail stores but destined for the supermarkets in the UK and USA. Here is a summary of producers in the region.

Australian Vintage Ltd (who own McGuigan wines, Tempus Two, Nepenthe) is the largest producer in the region with a solar powered winemaking facility at Buronga Hill as well as an 11-million-dollar bottling facility at Merbein. It is here that the popular Black Label range of wines is made. Their Shiraz is constantly the top selling red wine in Australia.

Duxton Vineyards is a name you might not have heard of, but this is another major company in the region. They bought the old Stanley Wines site at Buronga in NSW. It is part of an investment group based in Adelaide and Singapore. They own 2,400ha of vineyards in the region and produce labels such as Pete’s Pure and Twill & Dais.

Qualia Wines crushes 50,000 tonnes of grapes that go into their Barramundi, Little Eden and SpeeWah labels. The company was founded in 2009 when it bought the assets of failed wine and beverage company Nektar Wines, including the Irymple winery next to Mildura.

Deakin Estate, at Red Cliffs, was a solid Murray Darling winery that was previously owned by The Wingara Wine Group who in-turn was owned by the Spanish Freixenet Group. But last year it was sold to Calabria Wines, along with the La La Land and Azahara labels.

Family owned Zilzie Wines have an impressive 1700 acres of vineyards in the region as well as sourcing fruit from other regions. This results in a 60,000 tonne crush. The Forbes family have been farming the land for 100 years but didn’t turn to grape growing until the 1980’s The family is keen on implementing environmental and sustainable business practices such as lighter weight bottles, using 100% renewable energy by 2025 and reusing waste water.  They offer a good range of organic wines called Butterfly Kiss. Check my reviews for recent tastings.

Lindemans Karadoc is mammoth winemaking facility for Treasury Wine Estate and the site for producing the Bin range of wines (e.g Bin 65 Chardonnay) as well as the lower alcohol Early Harvest line.

Trentham Estate is located at Trentham Cliffs and has a popular cellar door and restaurant. The Murphy family have been grape growing and winemaking for two generations now with the first vines being planted in 1952. Sadly, I was unable to visit as it was on the NSW side of river. They have 45 hectares of vines planted but also source fruit from other regions. They have a range of Italian varieties under ‘The Family’ brand that are keenly priced and well made at $18.00 a bottle, which represents great value for money. They have a fabulous dessert wine made from the CSIRO grape variety Taminga. More wine reviews here.

Finally, here are a selection of smaller local producer. Firstly, Monak Wine Co is on the NSW side of the river and made their first wines in 2020 crushing a tiny 20 tonnes of local grapes. Cindy Heley is the winemaker and owner. Her Mon Doyen SGM was highly rated. The Mon CinQ range are attractively presented and the Pinot Grigio I tried was also recommended. (see below)
Robinvale Organic Wines is located between Swan Hill and Mildura and has an eclectic range of wines, often sold with some bottle age. I only tried a couple of wines, but their Demeter Kerner stood out.
There are a couple of local producers who rely more on other regions grapes rather than local fruit. Cappa Stone wines is a family business with Donna Stephens as winemaker. Standout wines were a Clare Valley Nebbiolo and a Bendigo Cabernet Sauvignon (see wine reviews page).